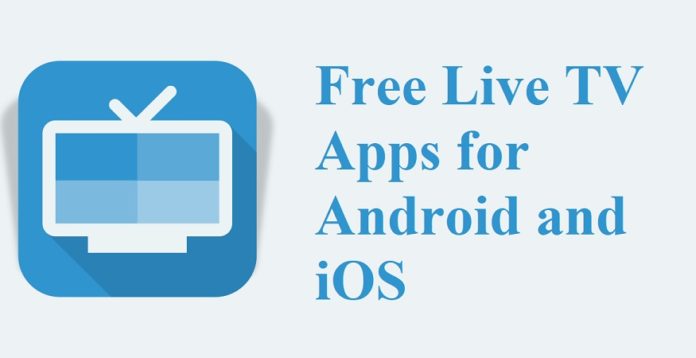 There is no doubt the internet is our new TV. This saying has become every person’s truth today. The days of sitting on the couch and watching TV are long gone. Modern-day life is keeping everyone busy, and this gave an excellent opportunity for developers to show their creative minds and skills. Leading to the creation of best Free Live TV Apps that let their users watch live TV channels from anywhere anytime for absolutely zero cost. People can now enjoy live television shows; however, their lifestyle allows.

Free Live TV Apps not only helped their users watch live television but also cut down their TV expenses per month significantly. Moreover, a lot of these live-streaming apps charge no fee in return. Without further ado, let’s have a look at some Free Live TV Apps, which turned down the days of traditional television and brought something much more amazing into the lives of their users.

Given below is our list of top Live Streaming Apps for Android as well as iOS. Go through the list carefully to choose an app that works best for you. Let’s begin!

UkTVNow App tops our list of best live streaming apps. UkTVNow is immensely famous in the top tier countries such as the United States of America, the United Kingdom, and Canada. Moreover, the app gives its users the option to browse TV channels from 10 countries and nine categories.

Over time, UkTVNow has acquired a lot of loyal users who are in love with the user interface of this app. The application offers 150+ channels to explore, starting from movies, documentary, entertainment, kids, and more. The best thing about UkTVNow is that it’s free of cost. Unlike other applications, UkTVNow poses no in-app purchases.

The app supports the majority of devices that have the necessary OS and configuration required for running it. The tested devices for this app are:

Mobdro is another great app that offers live TV feature. Along with that, it offers the option of movie download. The reason for this app’s popularity is its user-friendly nature. The app is easy to use, and this app is an open-source project meaning that all its services are free.

The development team works hard to keep the app bug free and updated. Mobdro App is available for both iPhone and Android users.

The unique thing about the Live Net TV app is that it supports live TV streaming even in the conditions of high traffic by providing alternative links for it. The motto of Live Net TV is streaming made easy. Users can also request for channels they wish to stream, and the Live Net TV App adds them as soon as possible. All one needs to do is go to the option of Channel Request present on their menu and type the name of the channel they wish to see.

Bonus #2: Are you fond of using Procreate to draw the cool stuff? If yes, check out our list of top Procreate Alternatives.

USTVNOW is a very popular live-streaming app in the USA. Most watched channels are US, BBC, CNN, CNN International, etc. The app is primarily used to watch documentaries and channels of information. USTVNOW has an amazing user-base. Content from the channels is updated as well as saved for users to watch later.

Users can also mark their favorite channels so that they don’t miss any updates. Moreover, users can also report for bugs and help the USTVNOW development team to fix them in the next updates.

Hulu TV App is a genie of TV, movies, news, entertainment, and more. It is considered the next-gen of TV that has so much more to offer to its audience. Hulu has 300+ TV channels starting from regional, comedy, news, TV shows, and more. One of the biggest reasons to switch to Hulu is its ad-free experience. The app is also cheaper than what most people pay for their television recharge per month.

Another great feature of Hulu is its compatibility with all devices. Moreover, users can never miss an update on sports events or their favorite show episodes.

Bonus #3: Today everyone is familiar with torrents and Mejorenvo is one of the many torrent sites. Check out the best Mejorenvo alternatives.

This app is an offering from Reliance Jio that lets its users watch Indian as well as International channels free of cost. It provides instant access to 600+ TV channels for free. Another great feature of the app is that it allows its users to catch up with previous shows from around seven days. For international users, the app might not work without the Jio SIM on the latest version. But it is possible to enjoy its content by downloading the previous version’ apk.

It is an international platform from Sony that hosts all its licensed content. Its free service works on an ad-based revenue model. Users can watch their favorite sports such as NBA, WC, FIFA, La Liga, etc. but with a delay of 5 minutes.

Users can have an ad-free experience by taking the subscription. They can also enjoy premium content and shows on subscription, although most of the Sony Channels are available live on the application for absolutely no cost.

MX player has changed a lot after the Times Network purchased it. It’s not just a player anymore. It now hosts premium, original, and exclusive content from leading Publishers and Producers. MX Player is absolutely free and is one of the top apps for watching TV shows, music videos, movies, Short movies, and web series. The app has 50,000+ hours of premium content and around 20 original shows too.

It is one of the best Free Live TV Apps in the market. Users can watch any channel they want as the app includes thousands of channels from almost all the countries. Not just TV shows, the app also offers an online radio feature that gives it a unique touch. Moreover, the users can stream as well as download shows and movies that they like.

Another great thing about ThopTV is that it’s updated by its developers on a regular basis. So, the user experience of ThopTV is level best, although the advertisements are quite annoying.

The Free Live TV Apps mentioned on our list can expand your circle of information with so much to offer. Users can watch anything with one simple tap. Download and use these applications to explore the amazing world of modern TV. Thank you for reading!